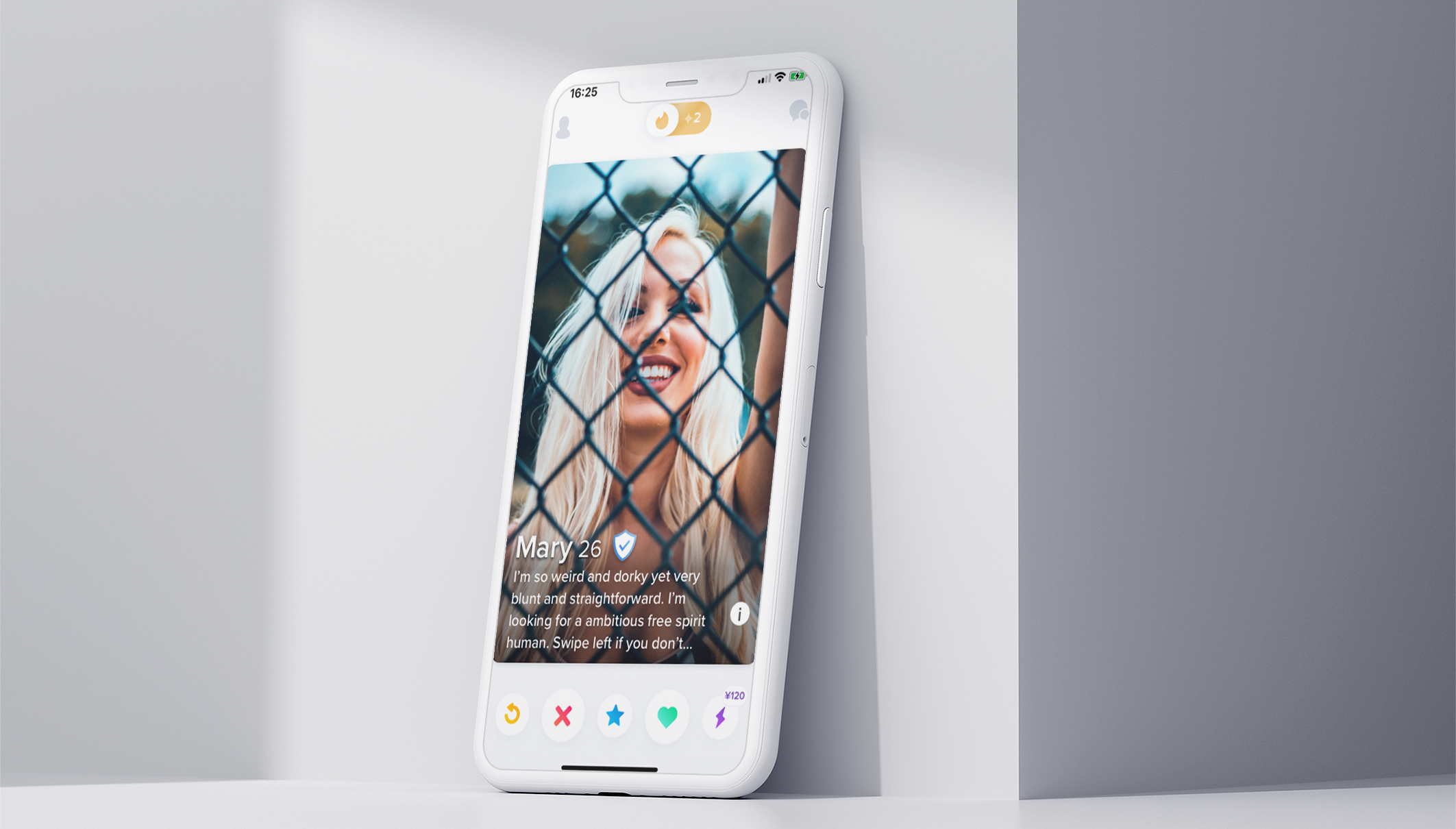 This is a concept project not affiliated with Tinder.

Since its launch in 2012, Tinder has become a global phenomenon which has changed dating culture and society. Users swiped over 1 billion times a day in 2014.
In recent times many competitors to Tinder have arisen and Tinder has seen stagnant growth in the US market with some sources reporting a decline in active users (tracking facebook logins). A third of people only install the app for a single day before deleting it.
‍
The goal was to add a new feature which will keep or increase the number of active users while keeping the same brand identity.
‍
Solution: A verification feature with aligns with current branding guidelines and integrates seamlessly with current UI and user flow.
‍
Since I lived in Japan for about 10 years, I have a unique perspective on current popular dating apps in the US. I could view the problem with a fresh set of eyes and I am aware of solutions currently being employed in other countries.

I performed some market research on Tinder usage statistics and demographics.

I downloaded and created accounts on the direct and indirect competitor's apps, and analyzed their strengths and weaknesses. I compared several direct competitors including other services under the Match group which owns Tinder. I also included 1 specialized dating service in the US which caters to a narrow demographic as well as 1 popular dating app in Japan.
In addition to this, I created two provisional personas based on the information I gathered from my market research. 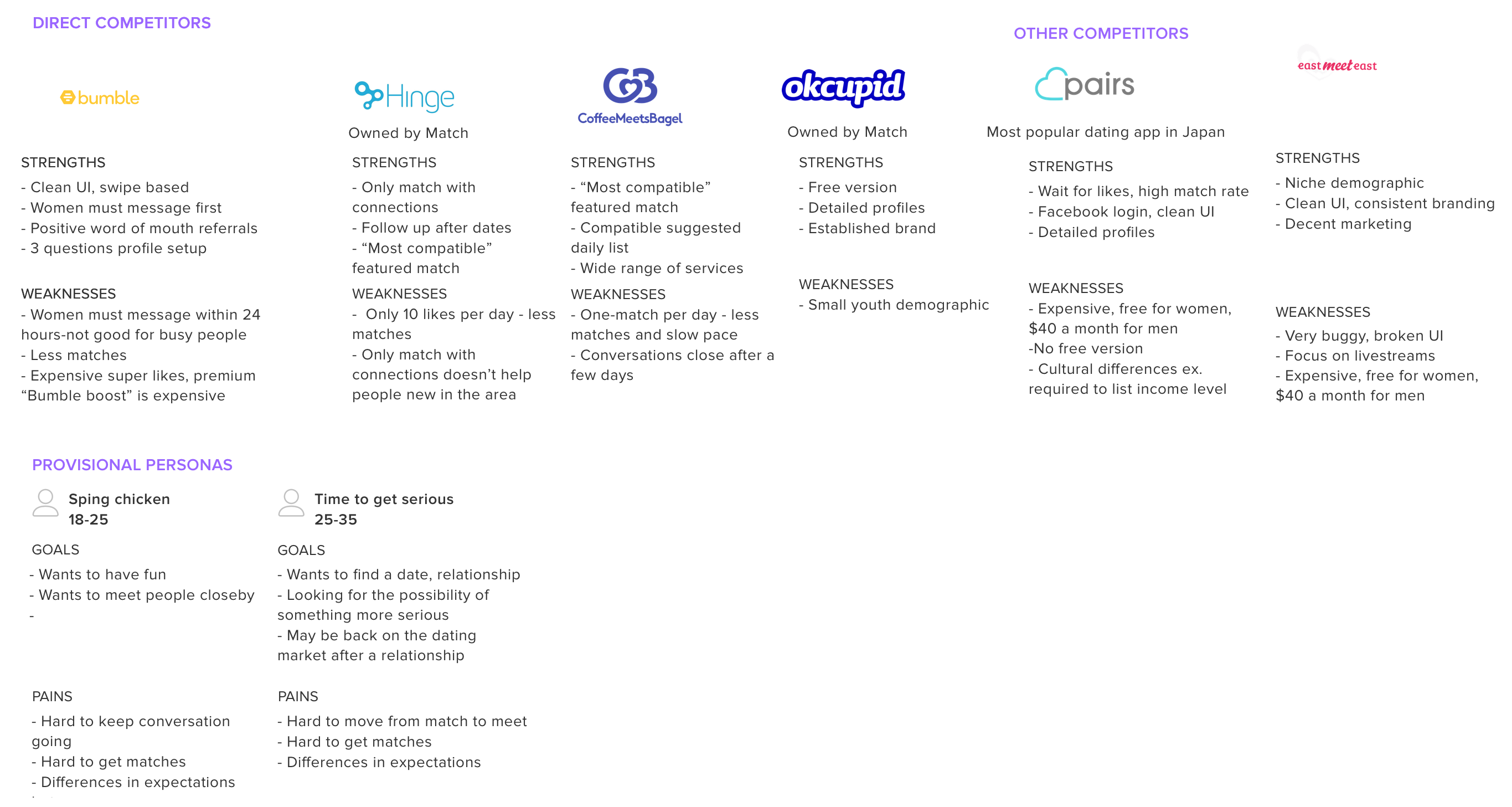 "I got in a relationship with a guy on tinder, a month ago. A month later he broke up with me. If you match with someone you don't know anything about them. They could be lying about their whole life to you. It's scary " - Tinder user, 25F

"Catfishing is an issue. You're essentially window shopping for people. I've definitely showed up for date and the woman looks totally different. There are certain things people do to be dishonest and you can tell." - Tinder user 34M

"Tinder seems a little shady, the other apps seem more trustworthy. Catfishing, I don't know anyone personally but i've heard stories. It's a TERRIBLE situation and I dont know how often it happens. Creepy." - Tinder user 28F

I interviewed 5 subjects aged 21-34 in a semi-structured format. It included 3 females and 2 males.

I created 2 personas based on my customer research and user interviews. 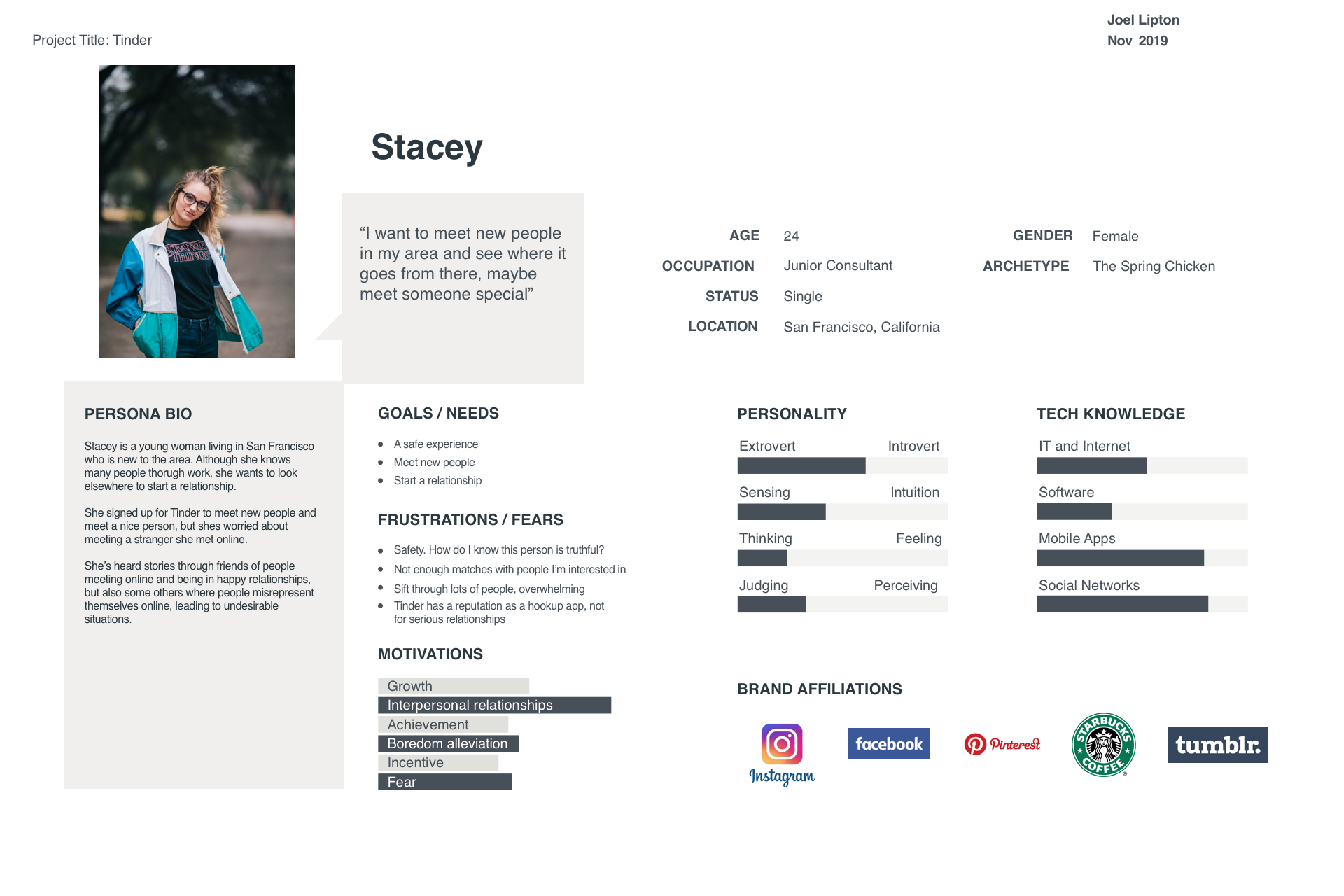 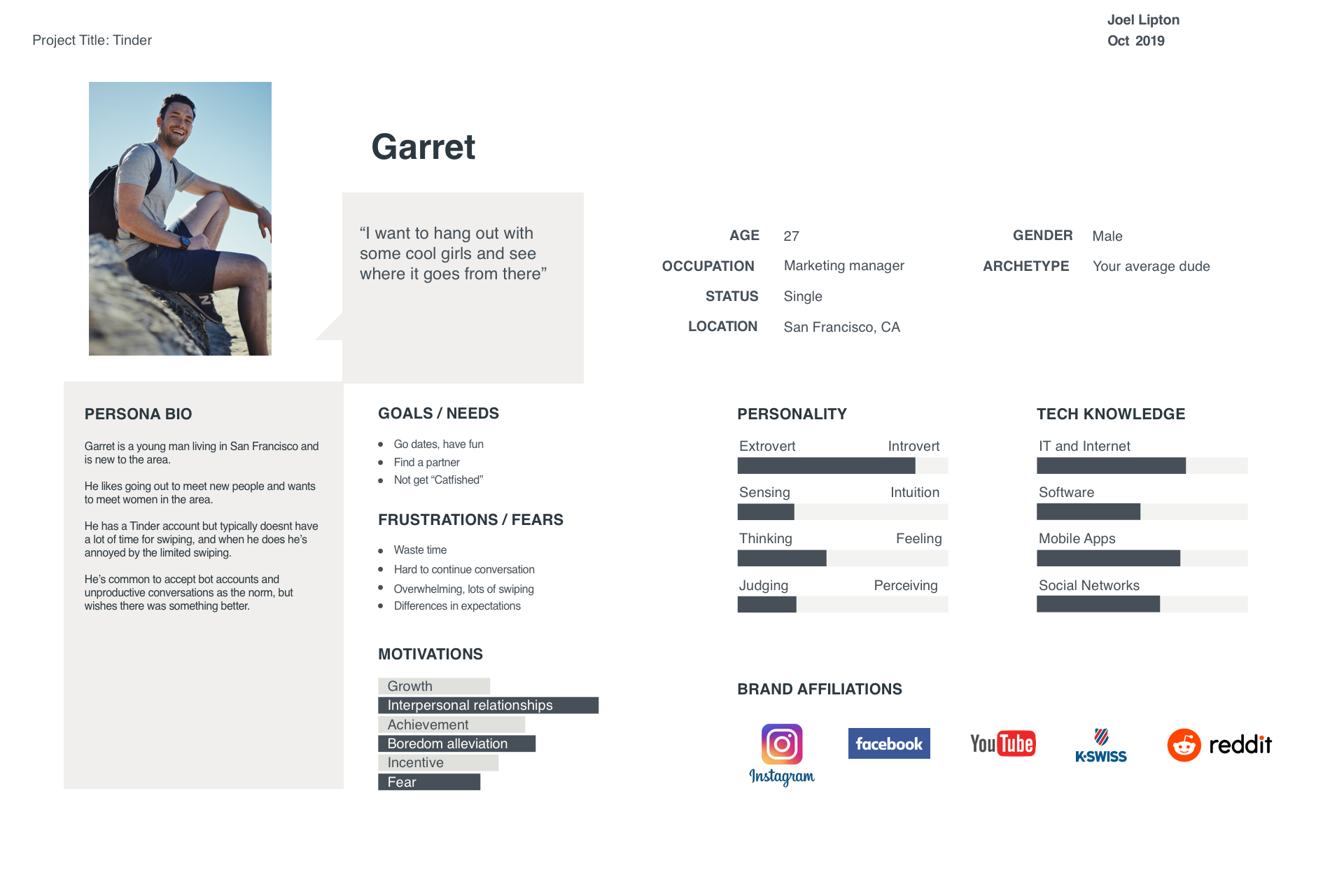 To better visualize the needs and pains of my personas, I created two empathy maps. 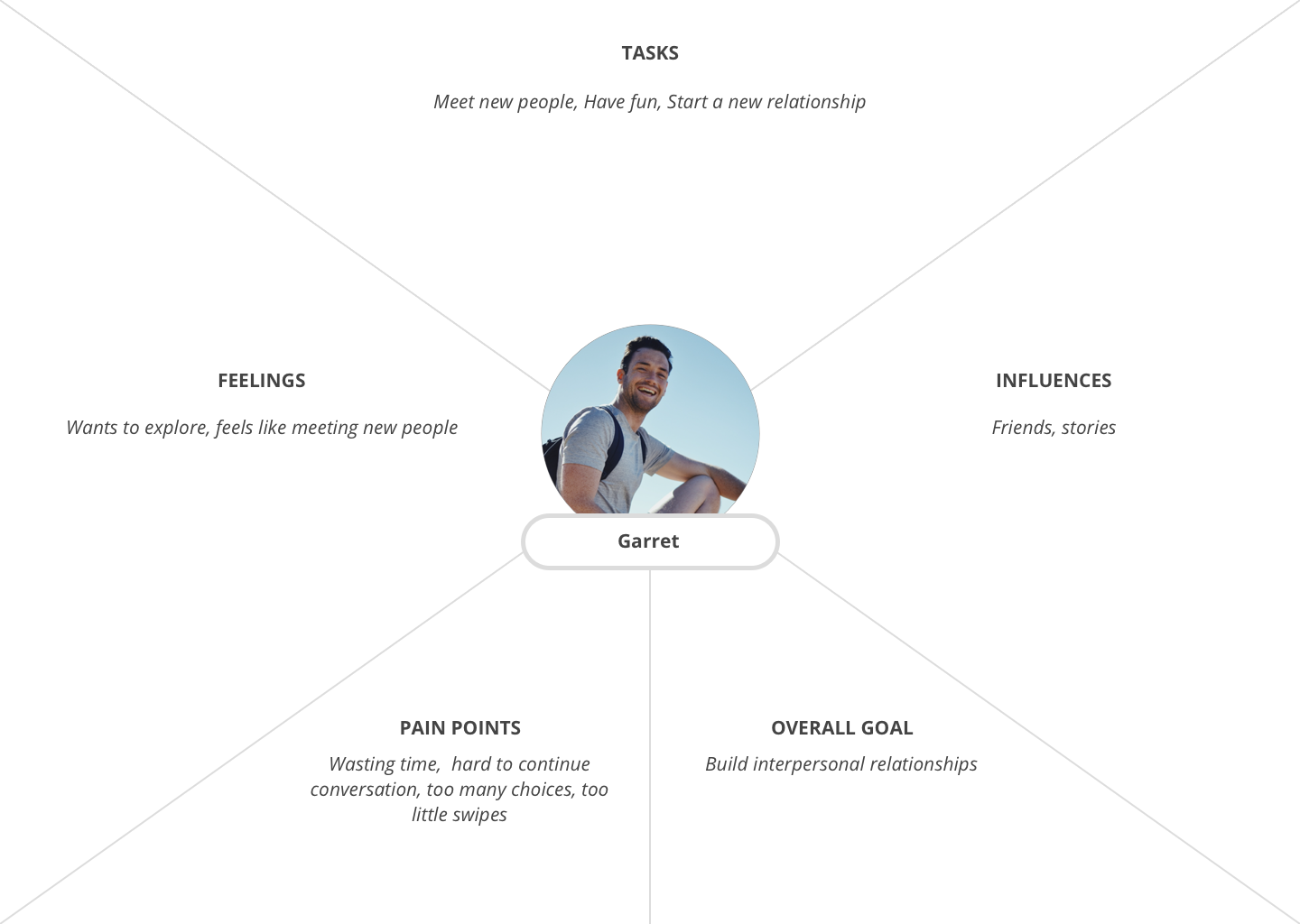 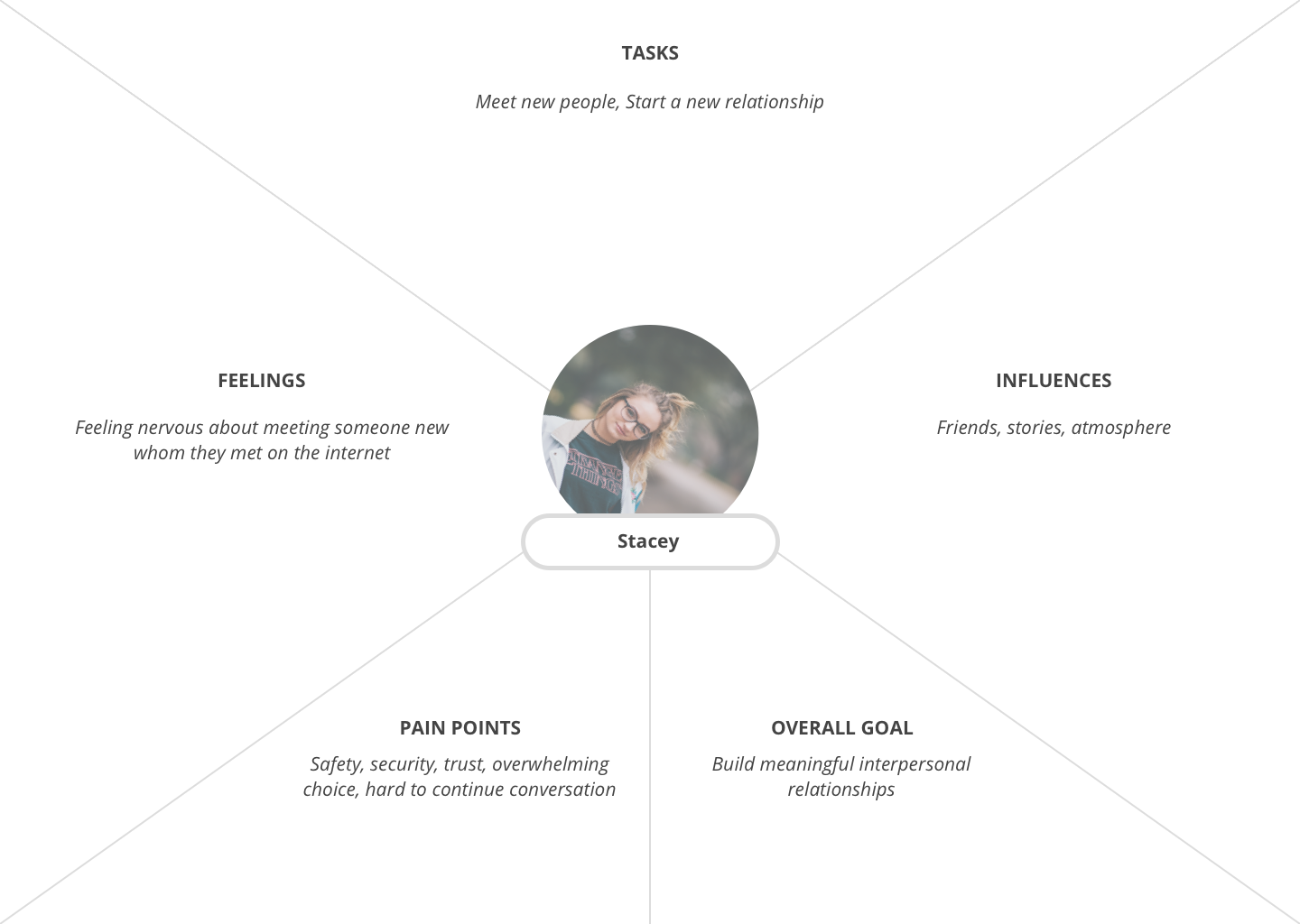 Understanding the intricacies of human attraction and mate selection is beyond the scope of this project and perhaps my lifetime. However, I realized that the overall goal of both personas is using tinder and other dating apps as a catalyst to build interpersonal relationships.

Users say they want a filter

Here's why I think that's a bad idea. A filter's purpose, by definition, is to exclude something unwanted. Introducing advanced filters to Tinder would lead to excluded groups, less engagement, more uninstalls, and ultimately less users on Tinder as whole.

For inspiration I looked to verification features currently in practice on Japanese dating and e-commerce platforms. Users must verify their accounts by submitting a picture of a government issued ID.
This would address the issue of safety and "catfishing" as well as bot and spam accounts. It also helps Tinder keep underage individuals off the platform. If users feel more secure, this may lead to increase engagement on the app via conversation and more active users.
American companies like Instagram and Twitter offer a similar verification feature for companies people in the public sphere. This shows that westerners are open to the idea.

I mapped out the app to visualize Information Architecture, and see where my verification feature could fit in. 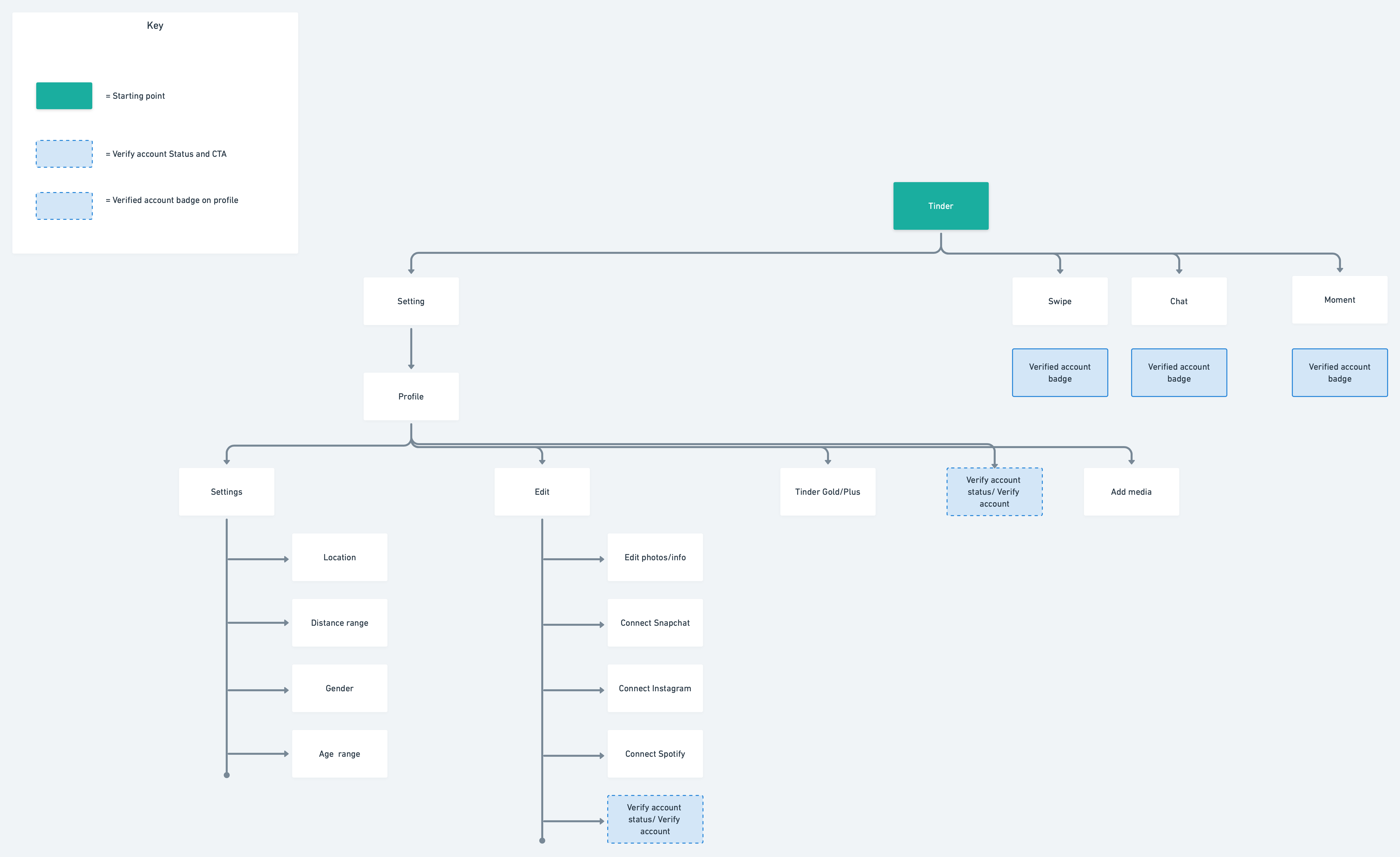 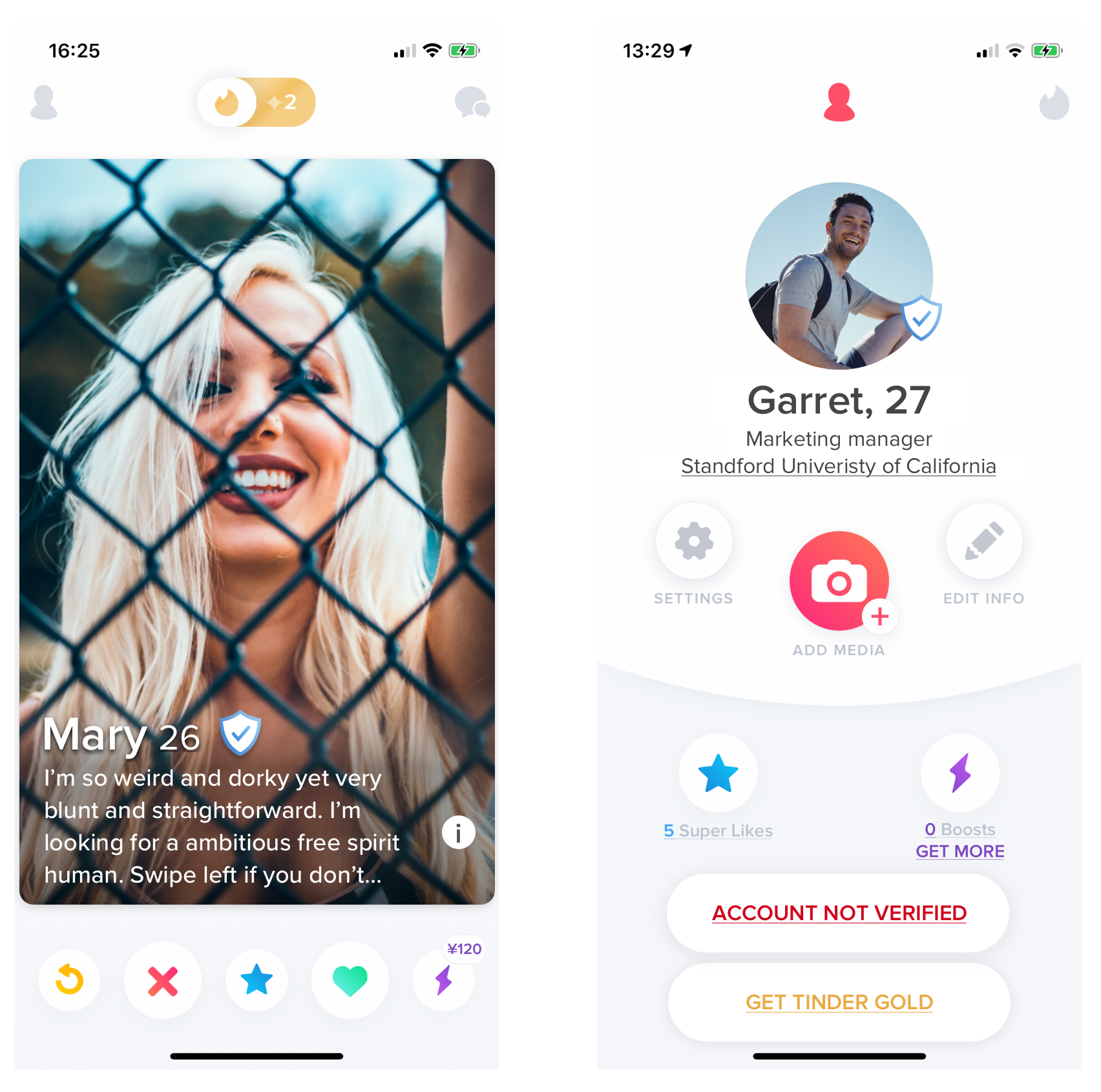 After choosing to verify, the task flow will go like this.

I created a set of wireframes which go through the verification process and a FAQ section. 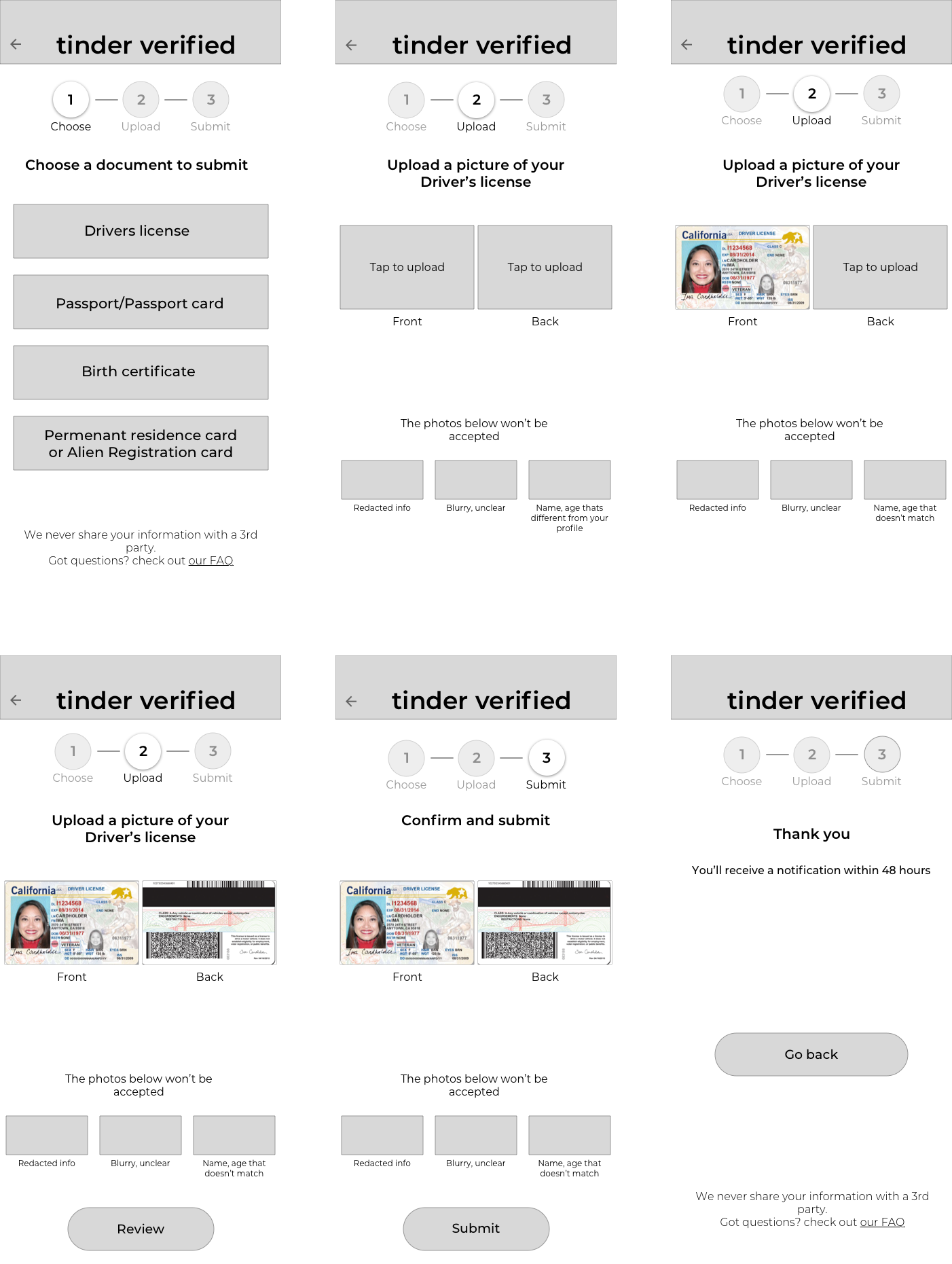 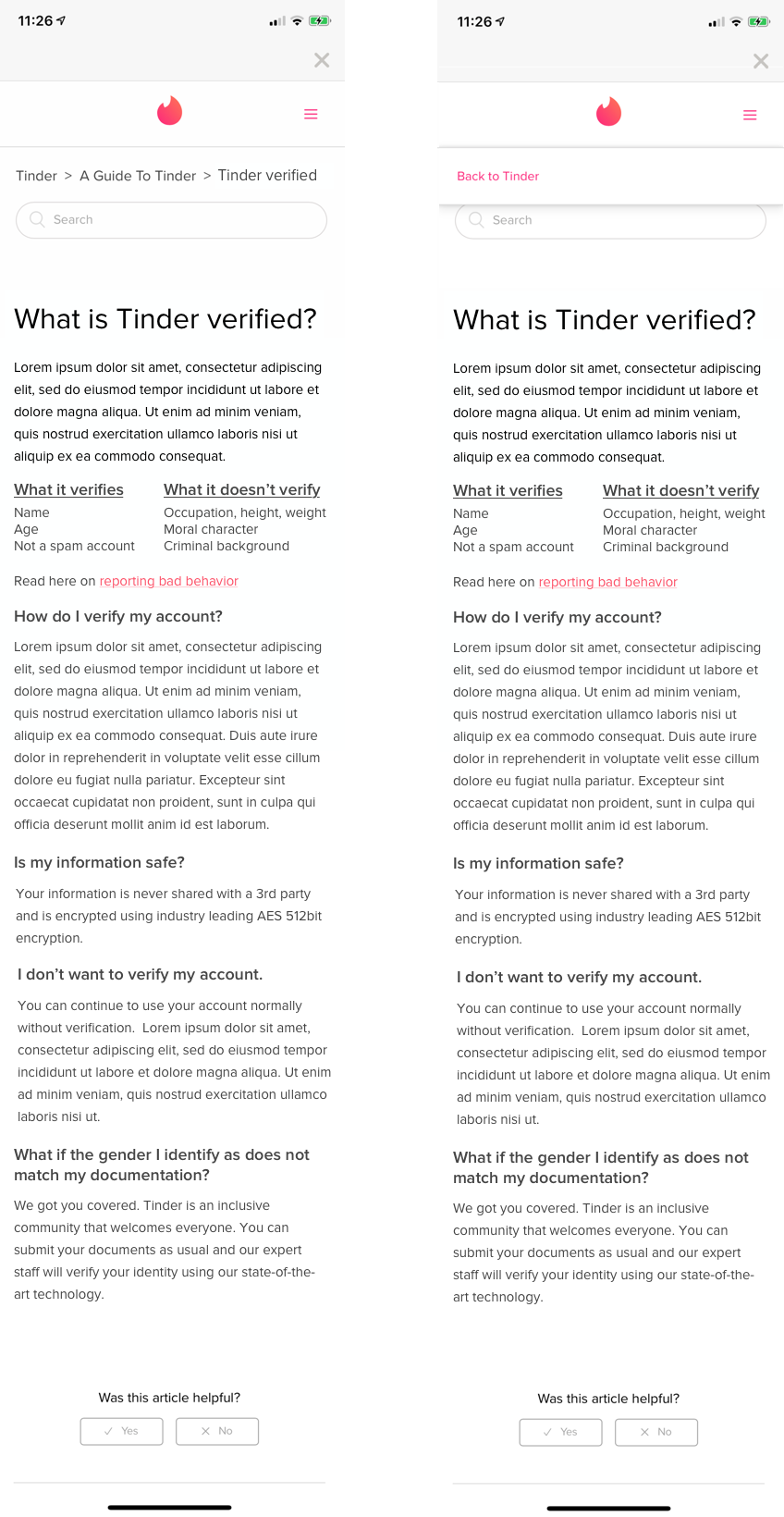 I tested the wireframes with 5 subjects for general usability testing using Invision.

Subjects were asked to complete this task

I incorporated some changes into my hi-fi mockups, such as moving the placement of the FAQ link above the CTA on the success screen after document submission. The reason for this being that all subjects expressed concern regarding submitting their documents to a company for verification. While the FAQ section addresses many of these concerns, only 1 out of 5 subjects decided to look at the FAQ.
Whether or not the FAQ could alleviate the concerns of those submitting documents would be the subject of additional testing.

Following suggestions from users, I also added a feature which when switched on will show only verified users when swiping. This is switched off by default.

This was a very valuable learning experience as I got to empathize with female users and listen to their concerns about dating apps.

Although this was a concept project, Tinder has recently released their own verification feature which uses facial recognition technology rather than government ID. It would appear that Tinder's own research and findings mirror my own.
‍
You can read more about the new feature and how it compares to mine here on Medium.